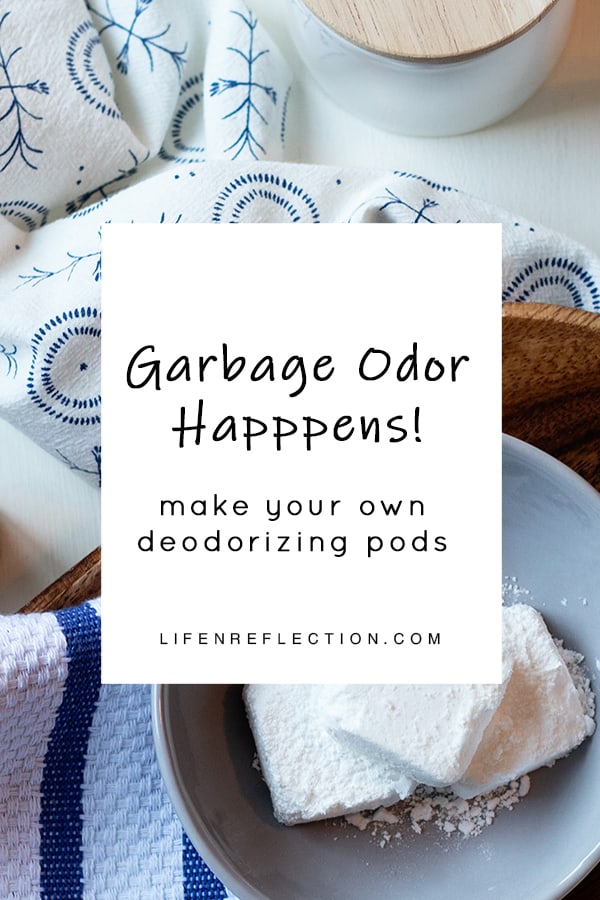 If you cook a lot of meals at home as we do, then you probably have experienced some unpleasant garbage odors. It’s just one of those things that come with cooking farm to table meals. I know we really should do more composting, but it’s just not convenient to run outside all the types to compost food. And I just can’t warm up to the idea of having a little composting bin on the kitchen counter. Can you? So, garbage odors are bound to happen! This post contains some affiliate links for your convenience, read full disclosure policy. 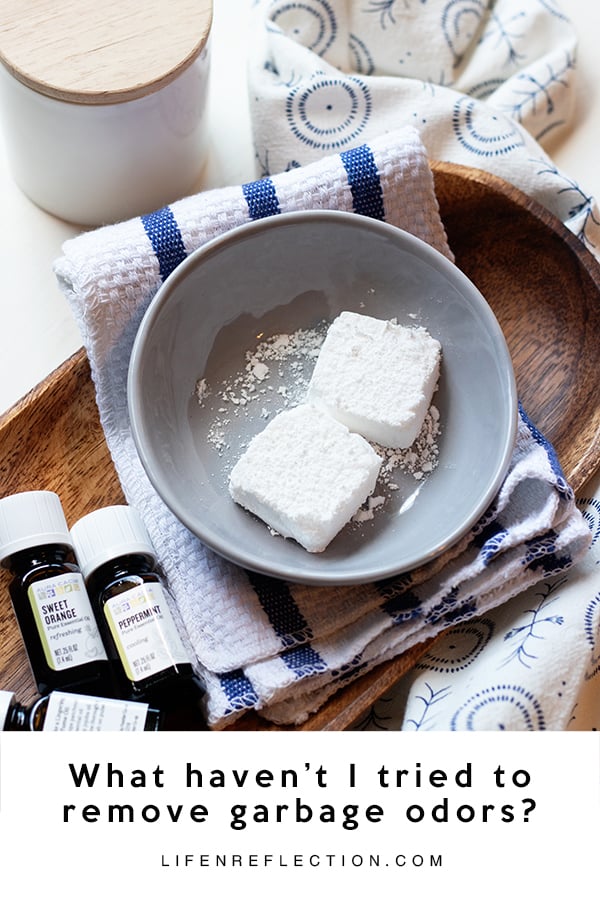 What haven’t I tried to remove garbage odors?

I must have a sensitive or strong nose because no kitchen odor gets by me unnoticed. Yeah, it’s a superpower I’d like to be stripped of. So, I have tried a multitude of things to eliminate garbage odors such as:

Coffee – I filled a small container with fresh coffee grounds and placed it under the sink. While coffee does have a strong aroma, that I love – this wasn’t the best idea as I accidentally spilled the coffee grounds when reaching in for the dishwasher tablets. Yep, that required the vacuum to clean up!

Orange – A traditional handmade ornament, orange pomanders made during the Christmas season smell amazing! They basically consist of poking handfuls of whole cloves into an orange, then hanging to freshen the air. Although fun to make, this is a rather expensive choice as a garbage refresher. Have you seen the price tag on whole cloves?

Peppermint – This stuff is quite the odor eliminator! I even used it to keep the mice away, before we got a cat. I have literally dropped straight peppermint essential oil into the garbage bag to banish odors. This works great until my husband takes out the garbage and the bright peppermint scent goes with it.

Lemon – This fruit is a well-known deodorizer too. I use lemon to deodorize my fridge, as a carpet refresher, and linen spray! So, using lemon as a garbage odor eliminator is a no-brainer. After drinking lemon water, cooking, or crafting with lemons I toss the peels into the trash. The fresh citrus scent really helps mask the garbage odor. That is until once again the garbage gets taken out and a new bag is started. 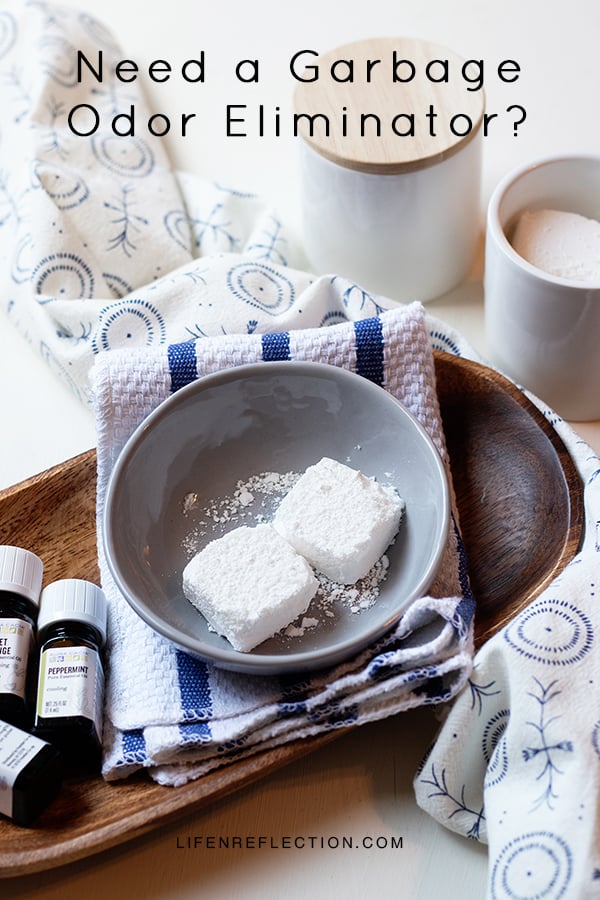 So… What works best as a garbage can deodorizer?

I’ve found a combination of orange, peppermint, and lemon works best to remove garbage odors. But, instead of using them as a one time use, I created a long-lasting alternative. Easy DIY garbage can deodorizer pods combine the odor removing power of all three in the convenience of a pod. See just how easy they are to use with this recipe for a dozen Citrus Mint Garbage Can Deodorizer Pods. 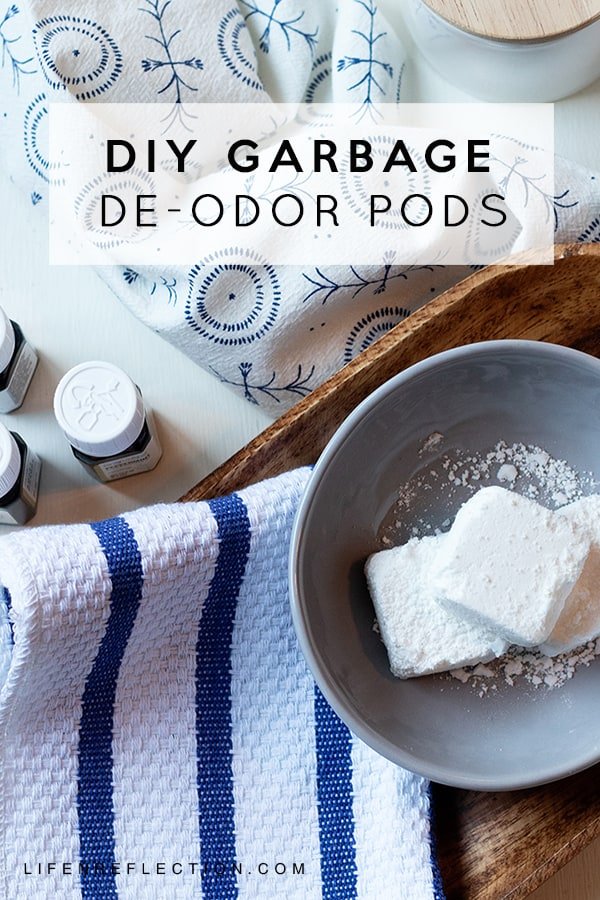 How to Make Garbage Can Deodorizer Pods:

Scoop one to two teaspoons of the mixture into a silicone mold (this is the one I use and recommend) press to compact. Allow to dry 24 hours before gently popping out each garbage can deodorizer pod.

First, start with a clean garbage can! Using a hose outdoors, rinse the garbage can with soap and water (castile soap works great). Then leave it outside in the sun to dry. Simply drop one citrus mint garbage can deodorizer pod into the bottom of the bin (not in the trash bag) or tape inside the lid. Toss and replace it as needed. 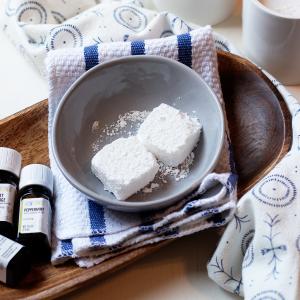 If you’re experiencing garbage odors make a batch of easy DIY garbage can deodorizer pods. Harnessing the power of orange, peppermint, and lemon to combat odors in the convenience of a pod! 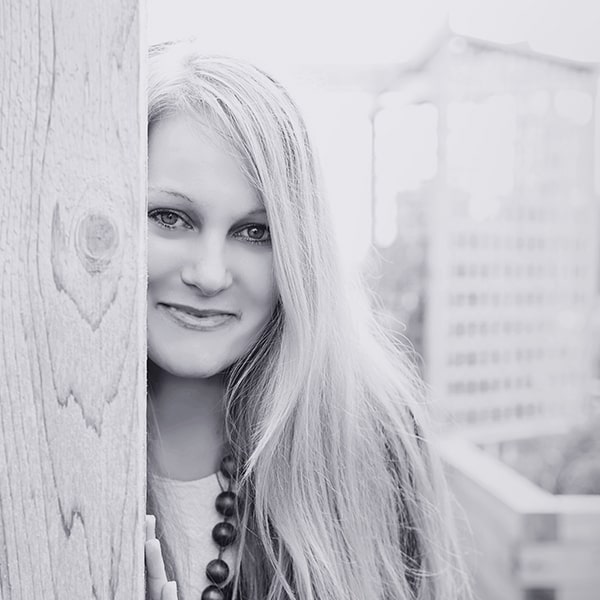 Author and Founder of LIfe-n-Reflection

I'm here to guide you on your path to simple living. From simplifying your skin care and cleaning routines to making your own candles and soap. The result is a life well-loved and well-lived. 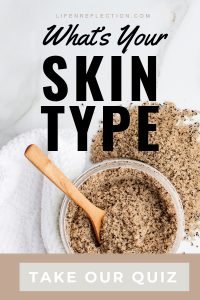 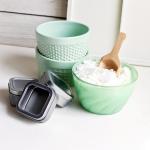 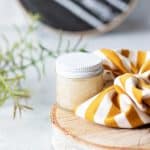 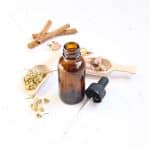